France: Creation of the Vygon Company. 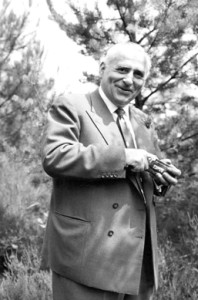 Pierre Simonet (on the right) has created Vygon in Ecouen, France.
The Belgian engineer had always been motivated by the idea of progress and had in mind since the end of the second world war to focus his creative energies in Health Care. As soon as 1949, he created the first French Blood Bank. A change in legislation requiring a physician to head such an organisation put an end to this venture.
Then, he created the “Establishments Dubernard” with the aim of introducing a new material to replace glass which was a widespread use at that time but very unsafe and unpractical. This new material was plastic. Pierre Simonet sold the company in 1960 to Laboratoires Labaze and after a short stay at hospital, where he became aware of the difficulties involved in sterilising products, the complexity of the work performed by the nursing staff and the vast improvements needed for patient care, he had the idea of developping single-use medical devices. Vygon was born.
Today, Stéphane Regnault, husband of the grand daughter of the creator, is continuing the family adventure.

Germany: Creation of this subsidiary in Aachen.

Thanks to that creation followed by the opening of a plant in 1973, Vygon starts building a group with an international dimension.

The plant is part of Vygon’s industrial cradle and produces high output manufacturing at competitive prices such as tracheal suction catheters and the Biovalve IV cannula, a major product for Vygon.

United Kingdom: Creation of a subsidiary.

Vygon UK is today the leading subsidiary of the group in terms of turnover.

Belgium: Creation of this subsidiary in Brussels.

Vygon Belgium has been in Brussels since 1998 and centralises all the commercial activity in Belgium, Holland and Luxembourg.

France : Opening of the SAP plant in St. Saulve near Valenciennes.

Since 1976, Vygon has been developping through the SAP plant disposable theatre products.
This plant is at the heart of Vygon’s new strategic stakes as it is involved in the development of custom packs among other things.

Creation of the Spanish, Dutch and Irish subsidiaries.

France : Opening of the SIPA plant in Avesnes sur Helpe, in the northern Pas-de-Calais region of France.

This plant has acquired extensive experience in manual or semi-automated production.
SIPA production includes respiratory products, wound drainage and the treatment of pain, such as epidural or spinal analgesia and nerve stimulation.

Colombia: Opening of a Vygon plant at Barranquilla.

This represents a new opportunity for Vygon to widespread its activities in South America.
This plant develops and produces product lines which are particularly adapted to the South American market, this site is destined for major development in the short term.Surgical brushes, endotracheal tubes, scalp vein sets are some examples of products produced in Barranquilla.

Uruguay: Opening of the Uruguayan subsidiary.

Products of Neonatalogy are key products for the subsidiary.

Sweden: Opening of the subsidiary.

Since then, the growth of Vygon in Sweden has been strong thanks to two particular areas: Neonatalogy and respiratory medicine.

Italia: Opening of the Italian subsidiary.

In a very good position on the Italian market, its success is particularly good in the area of Regional analgesia. The Italian subsidiary is the fourth subsidiary of the group.

Czech Republic, Poland: Opening of the Czech and Polish subsidiaries.

Denmark: Opening of a subsidiary.

Acquisition of Medwin, a French company specialized in enteral pumps.

– Opening of a subsidiary in Singapore

Finland: creation of a subsidiary

Acquisition of the Peruvian company Macatt Médica which becomes a subsidiary of the group.

The company distributes most of Vygon’s products in Peru, including an important enteral nutrition catalog.